TSMC: Why China wants to own Taiwan … it’s all about computer chips

In the 18 December 2020 episode of our online show Friday Beers with Marc & Stuart, we flagged that Taiwan could likely be the next trigger for a market correction because of China’s ongoing ambitions to own that highly innovative and prosperous island. Taiwan was established in 1949 after the anti-communists fled mainland China and set up shop on the island. China has claimed that Taiwan, or Chinese Taipei as the Communists like to call it, has never ceased to be a part of Greater China.

Obviously, not owning Taiwan for the last 70 years or so has been a thorn in China’s side, especially since the country has been thriving as a free market economy. And for ideological reasons, Chinese president Xi Jinping wants the island back under Chinese control.

Check out our recent webinar on the current tensions between China and Taiwan/US and how the world is responding when it comes to security of semiconductor supply.

Stocks Down Under Semiconductor Webinar

China wants what Taiwan has

However, ideology is only part of the reason. You see, Taiwan has something that China doesn’t, which is access to the most advanced semiconductor manufacturing equipment in the world. Taiwan’s crown jewel is a company called Taiwan Semiconductor Manufacturing Company, or TSMC for short. It is listed on the Taiwanese and New York stock exchanges (TPE:2330 and NYSE:TSM) and ranks in the Top 3 biggest chip companies in the world, right after Intel and Samsung. And China wants it.

TSMC is a so-called semiconductor foundry that manufactures computer chips for other companies that don’t own their own chip manufacturing plant, or fab. Think of consumer electronics companies, like Apple, as well as a range of other companies in all sorts of sectors, including Automotive, Medical, Industrial and … Military! Remember that last sector as you read on.

Now, back in the 1980’s and 90’s, semiconductor foundries were much less advanced than they are today. In essence, they “simply” manufactured someone else’s chip designs and R&D was rather limited when compared to leading edge chip companies back then, like Intel. However, over time most foundries have made a very significant transition to become leaders in semiconductor manufacturing, to the point that a company like TSMC is now the undisputed world leader in manufacturing at leading edge resolutions.

When we say resolutions, we mean the linewidth of the chip circuitry, which is measured in nanometers (nm). A nanometer is one-billionth of a meter and is about the length that your fingernail grows each second. A strand of human DNA is about 2.5 nm in diameter and a human hair is roughly 100,000 nm wide. So, you’d likely agree when we say that a nanometer is pretty small. In order to create chip circuitry, a semiconductor wafer needs to go through a very large number of process steps. The most advanced computer chips require around 700 steps as the chips are built up layer by layer. With up to 75 layers for advanced chips, this process typically takes around 3 months. While each production step is advanced in itself, the most critical part of chip manufacturing is the so-called lithography step. This is where the circuitry of a specific layer gets “printed” on the wafer by shining laser light through a so-called photo mask that contains the design for that layer. Think of it as an old-fashioned slide projector where the beamer is the source of the laser light, the slide is the photo mask with the chip design and the white screen is the semiconductor wafer. Once the circuitry is projected on the wafer, the circuitry layer is “developed” through further process steps before going into another round of lithography until all layers have been built.

When yours truly started out as a Tech analyst in Europe in the mid-1990’s, leading edge lithography systems used Deep Ultra Violet (DUV) laser light at wavelengths of 193 nm and 248 nm. Elaborate systems of mirrors and lenses were used to reduce the wavelength of the light up to 5x, below 70 nm, to print the circuitry on the wafer. So, the wavelength of the laser light you use is a pretty important determinant of the resolution of the chip you want to manufacture.

However, following Moore’s Law, chip resolutions have shrunk quite dramatically in the last 20 years. And with shrinking chip sizes came the requirement for different light sources. You see, if a chip manufacturer wants to build chips with a resolution smaller than 10 nm, DUV light just won’t cut it anymore. Enter Extreme Ultra Violet (EUV).

The best company you may never have heard of

While working with DUV laser light in lithography systems is obviously extremely complicated, for a long time the global chip industry had three suppliers of lithography systems to choose from, i.e. Nikon and Canon, both from Japan, and ASML (AEX:ASML) from The Netherlands. The latter is a 1980’s spin-off from electronics giant Philips and listed on the Amsterdam stock exchange in 1995.

It was obvious early on, though, that ASML’s prowess for fundamental physics research was a problem for the two Japanese lithography players. For a long time, they ruled the lithography world and were now confronted with a much more agile player that was grabbing market share year by year. This was based on better R&D and simply more advanced products.

Canon was the first to throw the towel as it just couldn’t keep up with the speed at which ASML was developing new lithography systems. Once market leader Nikon followed years later as it lost most of its market share to ASML. The latter now basically owns more than 85% of the overall lithography market and 100% of the most advanced part of the market, i.e. the market for Extreme Ultra Violet lithography systems. 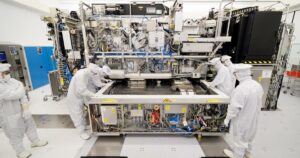 An ASML EUV system being assembled

EUV is not for everyone

We believe it’s safe to say that no leading edge chip manufacturer can do without ASML, because it is the only company that can enable chip manufacturers to scale down the size of their chips below 10 nm. TSMC, Samsung and Intel realised this back in 2012 when all three invested a combined US$6.5 billion in ASML enabling the company to accelerate its research into EUV systems. The investment has paid off, not only through the meteoric rise of ASML’s share price, but also because these three amigos had early access to EUV systems. In turn, this has allowed them to stay ahead of the curve, especially TSMC and Samsung. Intel has dropped the ball in the last 10 years, but that’s a story for another time.

Because an EUV lithography system costs about US$130 million, only a select few companies can afford to buy them. But money is not the only obstacle. Remember we mentioned the military as an important sector for semiconductors? As weaponry and surveillance systems get more advanced, the requirements on their individual components goes up too, including computer chips. Rockets, drones, fighter jets, satellites, decryption systems, opto-electronics systems, to name a few, all require increasingly advanced semiconductors. And when you add a layer of Artificial Intelligence to these systems, it is clear that tomorrow’s computer chips will all require EUV lithography, because they need to scale down well below 10 nm to allow for more powerful, faster and more energy efficient chips. And this brings us back to the original question: Why China wants to own Taiwan, and TSMC to be more specific.

The United States has blocked China’s access to EUV systems 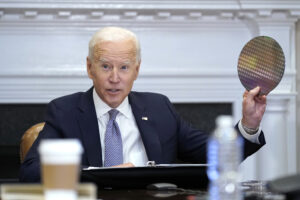 And China is now in a position where it can see and smell EUV systems working in TSMC’s fabs across the Taiwan Straight, but it has none of its own. And that doesn’t sit very well with Xi Jinping and his military advisers. Not only is China unable to manufacture the most advanced semiconductors itself, the perceived renegades in Taiwan are manufacturing them and also selling them to customers around the world, including US-based defense companies.

So, long story short: China is lacking advanced semiconductor manufacturing capabilities for its military apparatus and needs TSMC if it is to keep up with the US, Japan and South Korea, coincidentally three of the main forces pushing back on China’s assertions of dominance in East Asia.

For this reason, we believe that at some point, China will make a move on Taiwan. Probably not in the very near term, but we think military action within the next five years is quite likely as TSMC has become the plaything of the world’s largest powers. The recent incursions of Taiwanese airspace by Chinese war planes are a prelude, in our view, and investors should expect tension between China on the one hand and the US and Taiwan on the other to only increase in the next few years. It might make you reconsider an investment in TSMC, doesn’t it?

Since we published this article in August, we have seen more developments around the US trying to choke off China when it comes to leading edge semiconductor technology. In addition to earlier export bans on advanced manufacturing equipment and chips that contain US technology, US citizens and holders of Permanent US Resident visas are now no longer allowed to work for or in Chinese facilities that manufacture advanced semiconductors.

When these unprecedented prohibitions were announced by the US government in October 2022, it meant that many companies, including ASML, Applied Materials etc, had to tell their US China-based staff to stop working and servicing their Chinese customers with immediate effect. So, these new measures had a direct impact on advanced Chinese chip manufacturing capacity.

It has gone so far that certain Chinese chip companies are now intentionally reducing the clock speed of devices so these products can no longer be considered advanced, in hopes of evading the wrath of the new US rules. Of course, this makes for much more expensive “old” chips, because these devices have been built with expensive equipment to be advanced products. If you’re slowing them down, you might as well use cheaper chips from a prior iteration that are cheaper to build, but will have the same performance. In other words, we believe this is unsustainable.

We’ll see if and how China can counter or work around the new US prohibitions, but we think these new developments have certainly not reduced the likelihood of China moving in on Taiwan some day…quite the contrary in fact!