Technical Analysis 101 with Stocks Down Under: Candlestick charts and price action

Technical analysis with Stocks Down Under

This is our second tutorial on Technical Analysis. You can find our first one on Sentiment and Stop Losses here!

Candlestick charts are widely used in technical analysis and were first introduced by the Japanese in the 1700s. Candlestick charts are constructed by the four most important elements in price information – the high, low, open and closing price – during a chosen time frame (hourly, daily, weekly, …) using a body and two wicks.

In a chart with a daily timeframe, each candle represents the lowest traded price on that day by its lower shadow and the highest traded price by its upper shadow. If the stock closed higher than it opened, the body of the candlestick is white, with the opening price at the bottom of the body and the closing price at the top. If the stock closed lower than it opened the body is black and the top of the body shows the opening price and the bottom of the body shows the closing price. 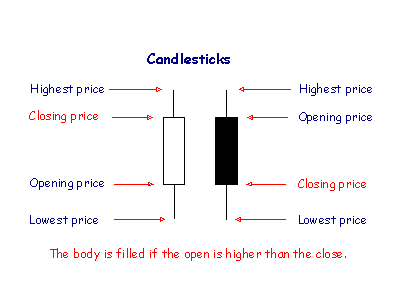 If you’ve been following Stocks Down Under for some time, you probably have noticed that we use candlestick charts for all our stock price charts. This is because we find candlestick charts to be the most effective in visualising important price points and the behaviour of the market during each session. This is particularly important when monitoring the price behaviour following an important inflection point, such as a breakout.

After the price breaks out of a pattern or a trendline, we closely monitor the forming candlesticks following the breakout to assess the validity of the move. Particular sequences of candlesticks form various candlestick patterns which are the cornerstone of price action – a form of technical analysis that incorporates the behavioural analysis of market participants as a crowd from the evidence demonstrated in price movements.

There are numerous candlestick patterns discussed in the technical analysis literature, but here we discuss a few of them that we have found the most effective in the stock market.

This candlestick pattern is formed by two candlesticks, a black body candle in a downtrend that is engulfed by a following white candle. It is a signal of strength on the side of buyers and starts below or at the close of a black candle and pushes the price above the high of the black candle.

Similar to the bullish engulfing pattern, but in the exact opposite manner. A white body candle in an uptrend which is engulfed by a subsequent black candle. The lower the black candle goes, the bigger the shift to bearish sentiment is.

This candlestick pattern consists of three white candles each closing higher than the previous day. This pattern signals high conviction on the side of buyers and it’s a strong bullish signal.

This candlestick pattern consists of three consecutive black candles each closing lower than the previous day. This pattern signals high conviction on the side of sellers and it is interpreted as a strong bearish signal.

It is important to note that candlestick patterns in general are short-term in nature and their significance should be interpreted within the context of an overall trend. For example, if we notice on a chart that the downtrend is broken and we also detect a Three White Soldiers candlestick pattern, we can be more confident that a trend reversal has taken place and an uptrend has started.

On the other hand, if we detect a Bearish Engulfing or a Three Inside Down candlestick pattern in the pull-back to the broken downtrend, we lose confidence in the possibility of a meaningful trend reversal.

In our next Technical Analysis 101 article, we are going to discuss price trends, one of the most important concepts in the technical analysis literature that we also use frequently in our technical analysis insights. We will show you how to detect uptrends and downtrends, draw trendlines and find trend reversals.