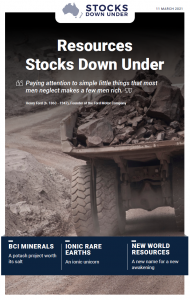 BCI Minerals: A potash project worth its salt

In today’s edition of Resources Stocks Down Under, far and away from the Pilbara’s reputation as an iron ore hotspot, there is also significant potential for a longlife potash development and that’s what BCI Minerals is endeavouring to make with the Mardie Potash and Salt Project. While it’s a step away from the company’s previously bullish take on the reddish metal, the market volatility expected in the coming years has finally prompted BCI to go in another direction, albeit with some remaining royalties on the side.