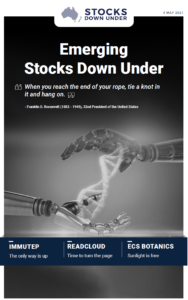 Immutep: The only way is up

In today’s edition of Emerging Stocks Down Under, Immutep has been involved in the emerging field of cancer immunotherapy for many years. You may remember it under its old name of Prima. However, when it was still called Prima Biomed, it acquired the French biotech Immutep SA in 2014. From that moment the company really got a head of steam behind it. Seven years later the clinical data from Immutep’s programmes is looking very interesting.