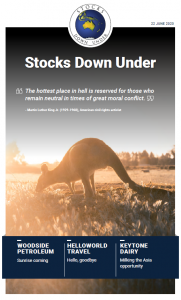 Let’s face it: The opening months of 2020 were not a good time to be an oil and gas company. Indeed, in April we at Stocks Down Under joked with each other that Hollywood producers were talking about a remake of the 1987 film ‘Less Than Zero’, with West Texas Intermediate in the title role. Woodside Petroleum, which in 2020 produced 89.6 million barrels of oil equivalent, didn’t go to zero but it did crash 58%, from around $36 a share on 8 January to $15 on 23 March, whereas the S&P/ASX200  “only” crashed 33%. However, with oil now recovering alongside the general market, we believe Woodside is well placed to recover with it.