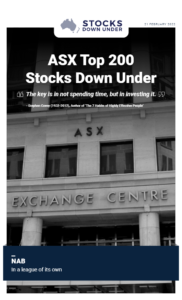 NAB: In a league of its own

In today’s edition of ASX Top 200 Stocks Down Under, we look at National Australia Bank (ASX: NAB) – the ASX’s second largest bank (by market capitalisation). Since we last covered NAB, on April 12 last year, it has easily beaten the ASX 200 and is only usurped among the Big Four by the Commonwealth Bank (ASX:CBA). While NAB investors may not get as high dividends and exposure to the housing market as CBA investors, NAB is the only other major bank with positive momentum, we think its the valuation hasn’t become excessive.