Quickstep Holdings is a manufacturer of aerospace-grade composite components

Quickstep Holdings Limited (ASX: QHL) manufactures advanced composites for defence and commercial aerospace applications for customers in Australia and the United States. The group employs more than 280 people. Quickstep was incorporated in 2001 and is based in Bankstown, Australia.

We believe Quickstep Holdings is well-positioned to benefit from both the increasing global defence spending and the recovery in commercial air travel. The stock price is on an uptrend and we see at least 50% upside to the current share price of around 60 cents.

An uptrend has started 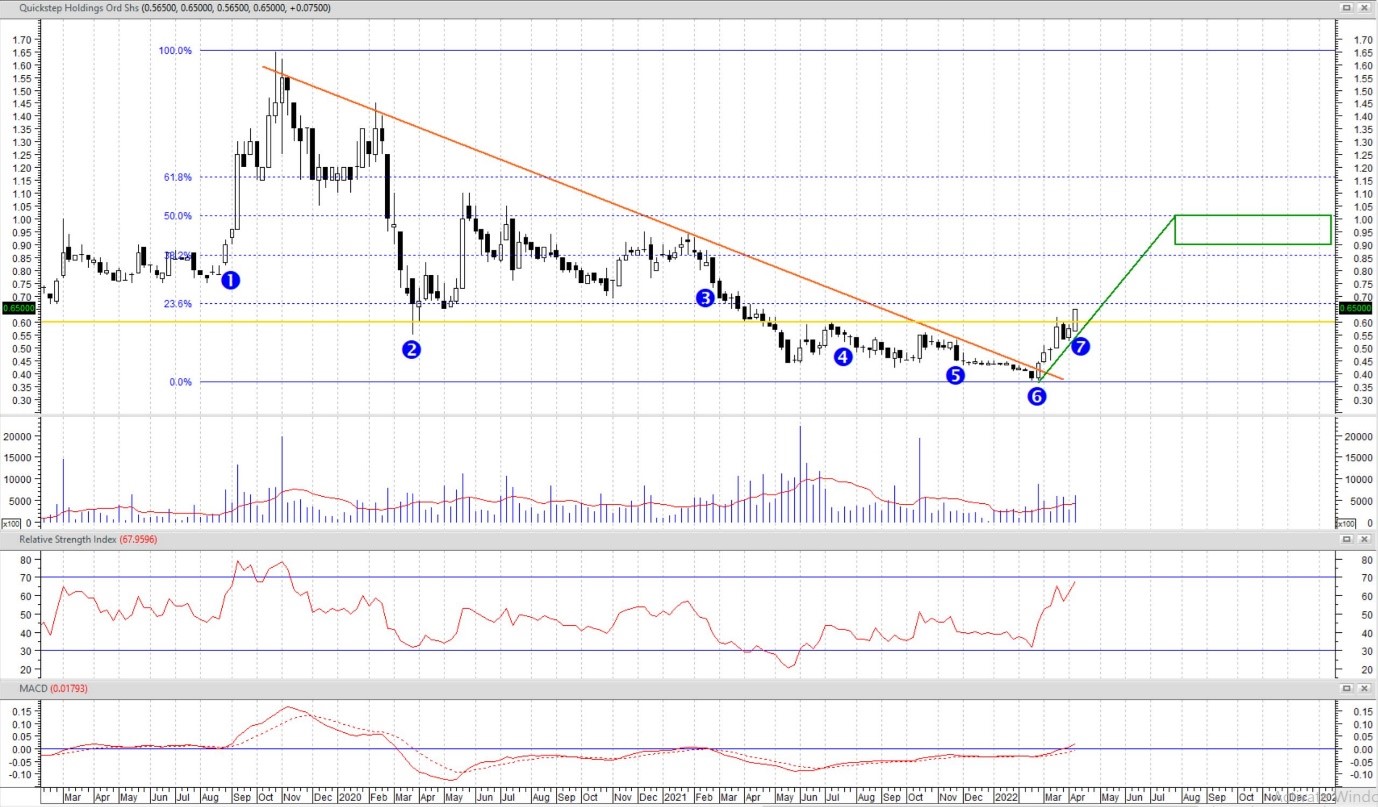 ❸ Quickstep Holdings warns of supply chain risks related to the COVID-19 pandemic, especially related to air and sea freight from the US.

❹ A dismal trading update by QHL adds to the bearish sentiment on the stock.

❺ Quickstep consolidates shares on a 10 to 1 basis.

❼ Quickstep signs a long-term maintenance contract of the V2500 Engine Nacelle by Jetstar Airways, operated on the Jetstar Airbus A320 fleet across the Asia Pacific.

The announcement of its maiden profit in 2019 took QHL’s share price to its all-time high of $1.65. The share price, however, spent the next 27 months declining to an all-time low of 37 cents. The bigger part of this decline can be blamed on COVID-19 disruptions as the company kept increasing revenues and improving its operating margins.

The downtrend was broken on the announcement of the impressive 1HY22 results. In another major step, the price broke the important resistance level at 60 cents (the yellow line on the chart). From a technical analysis perspective, this signifies a shift to bullish sentiment on the stock.

Quickstep is set to benefit from the increasing global defence spending

With increasing geopolitical tensions and a war raging in Ukraine, governments around the world, and especially in Europe, are increasing their defence spending. This has put purchasing more of the US’ most advanced combat aircraft F-35 high on several countries’ agendas. F-35 fighter jets are multifunctional and can be used to maintain air superiority and for strike missions. They are also able to provide electronic warfare as well as intelligence, surveillance and reconnaissance capabilities. All these capabilities make them a must-have for many countries looking to strengthen national security.

Quickstep is a manufacturer of advanced carbon fibre products for F-35 fighter jets. The company mentioned the ramp-up of production rates on 10 additional F-35 parts previously announced to the market as a major reason for its 14% sales growth in 1HY22. We expect revenues from F-35 parts production to grow sharply in the coming months on the back of this increasing global defence spending.

More business to come for the commercial aerospace segment

With the easing COVID situation, commercial air travel is quickly returning to its pre-pandemic levels. Quickstep Holdings mentioned in its 1HY22 report that it is well-positioned to take advantage of the expected recovery in its MRO business (MRO: maintenance, repair and operations). It didn’t take QHL long to be proven right when the company signed a $30m long-term maintenance contract with Jetstar less than two months later (Point 7 on the chart). More of this type of contract can be coming Quickstep’s way as Australia is looking to become self-sufficient in key industries.

How to play Quickstep

Quickstep Holdings’ share price broke the major resistance level at 60 cents (the yellow line on the chart) on the announcement of the maintenance contract with Jetstar (point 7 on the chart). From a technical analysis perspective, if this breakthrough is confirmed, it paves the way for the price to move towards its next major resistance level at $1.00 in the next 6 to 9 months. In addition to being an important psychological level, $1.00 also coincides with the 50% Fibonacci retracement level of the downtrend that started in 2019 (the orange line on the chart).

On the other hand, if the breakout turns out to be a false move and the share prices falls back below the 60 cents level in the short term, this will be an indication of a major halt in the momentum. A break below the latest low at 52 cents will create a lower low and it will be an initial sign of bearish sentiment and should be used as a stop-loss indicator.