Rox Resources (ASX: RXL): Set up for a great trade in a bear market

Rox Resources is sitting on lots of gold

Rox Resources Limited (ASX: RXL) explores for gold, nickel, copper and platinum group elements. Its flagship project is its 70% interest in the Youanmi Gold Project, located 480km northeast of Perth and 400km inland and to the east of Geraldton, Western Australia.

The latest announcement by RXL indicated a substantial increase in the total gold resources at the Youanmi gold project, to 3Moz of gold. Understandably, that lit a fire under the share price.

Let’s first have a look and see what moved RXL’s share price in the last eighteen months. 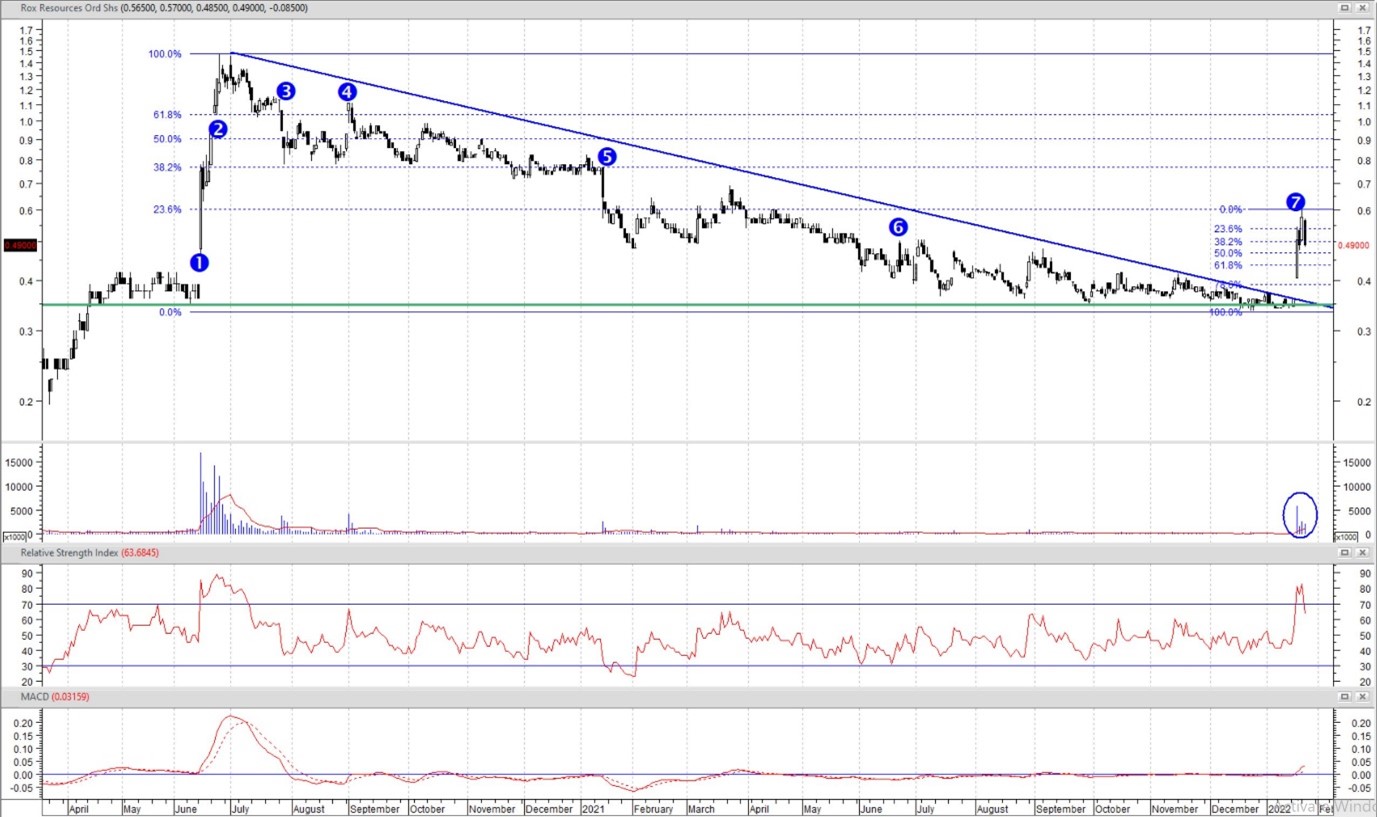 The Youanmi drilling results announced during June 2020 were very impressive and pushed the price up all the way from 36 cents to almost $1.50 (Points 1 and 2 on the chart). Since then, Rox Resources had numerous announcements regarding its gold discoveries at its Youanmi Gold Project, which all failed to impress the market, either due to low grades or to small sizes of the gold discoveries reported.

The size of the gold resource is massive

In the company’s latest announcement of 20 January 2022 (point 7 in the chart), RXL substantially increased its total mineral resource at the Youanmi gold project by 1.34Moz of gold to 3Moz of gold. As can be seen in the chart, this announcement impressed the market a lot. The share price broke the mid-term downtrend (the blue trendline in the chart).

RXL’s current Enterprise Value is about $70m and with a resource size of 3 Moz of gold and considering ROX’s 70% interest in the project, the capital cost per ounce of gold is A$33, which is very cheap for a resource in a low-risk jurisdiction such as West Australia.

From a technical analysis perspective, the developing market structure after the breakout shows signs of change in the market sentiment on the stock from bearish to bullish. The initial market response to the announcement was followed by bullish candlestick patterns and increased trading volumes, which indicates an increased market attention to the stock.

The gold price volatility is the biggest risk

The major risk to the share price is the gold price. The fluctuations in the price of gold will be reflected in RXL’s share price and there’s always a chance for the gold price to slip lower. Gold peaked in mid-2020 at over US$2,000 per oz, but spent the rest of 2020 and all of 2021 consolidating the gains of previous years.

Not every announcement related to drilling will necessarily be well-received by the market since the building out of the Youanmi resource is a work in progress.

A suggested action plan for investors

Barring any further exiting announcements by Rox Resources, the share price is expected to retrace to the support level at 35 cents (the green line on the chart) given the current bear market. This support level is considered reliable as it has held up the price in the past seven months. Moreover, this price level is considered cheap by the market as the shares were trading at this level before the first significant gold discoveries at Youanmi Gold Project in June 2020 (point 1 on the chart). As such, this level can be used as a stoploss, because a potential break will show serious bearish sentiment on the stock.

We believe buy limit orders between 33 to 40 cents will likely get filled given the current bear market. The entry at those levels with a stoploss at 29 cents and take-profit at 60 cents offers a great risk-reward trading setup, in our view.