What stocks to buy when central banks are killing the market vibe?

Time was when the de facto European monetary policy was essentially set by the German Central bank, the Bundesbank (BuBa). If German inflation expectations were getting too high in the eyes of the BuBa, it would just increase interest rates with little to no regard for other economic metrics. Price stability, i.e. low and stable inflation, was the bank’s key mandate.

Other European countries, like The Netherlands, could piggyback of the BuBa’s monetary policy by mimicking its policy, i.e. by following its interest rate setting, and achieve almost similar price stability as Germany enjoyed.

Things have been going downhill for a while now

But things changed when the European Central Bank (ECB) took charge of monetary policy setting for the entire Eurozone in 1998. Sure, the first ECB President was hawkish Dutchman Wim Duisenberg, who might as well have been German when it comes to his monetary policy. And even under the Bank’s second President, Frenchman Jean-Claude Trichet, the ECB had a pretty solid run in maintaining price stability through 2007.

But in the last 15 years, or so, things have gone downhill when it comes to, what should be, the ECB’s key mandate, i.e. price stability. The southern European debt crises have meant that the ECB has increasingly been focused on making sure the Eurozone doesn’t fall apart rather than price stability. And we’d argue that the Bank’s current President has completely politicised the role.

Get ready for the next European debt crisis

Instead of fighting inflation, Christine Lagarde seems more concerned with shielding countries like Italy from fast-rising funding costs now that spreads between German and Italian 10-year bond yields have widened to more than 200 basis points. A futile exercise in our view.

And while inflation hasn’t been an issue in the Eurozone since the Global Financial Crisis (GFC), it has started to rear it’s ugly head again, starting in October 2021 when inflation was higher than 4% for the first time in a very long time. And it’s only gone higher since then.

And as we argued back in October, inflation is going to stay with us for a while! 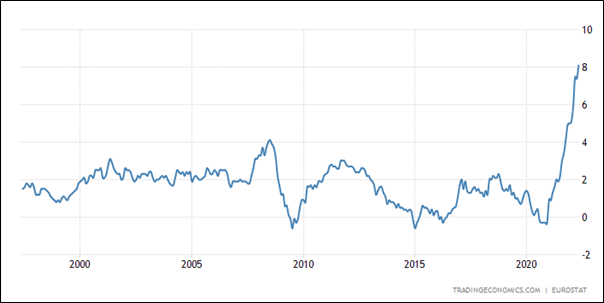 The ECB is not even on the curve

We think the Eurozone is in serious trouble. The fact that the ECB’s deposit rate is still -/-0.5% when Eurozone inflation hit 8.1% in April and went up to 8.8% in May is mindboggling. The ECB is not behind the curve…it’s not even on the curve! To bring inflation under control, interest rates will have to go up very substantially, which we believe will likely trigger another Mediterranean debt crisis.

Things are not much better in the US, where the Federal Reserve System (Fed) is now scrambling to get inflation under control following the 8.6% print in May. Its current, frantic interest rate increases will likely run the US economy into the ground by triggering a recession, maybe as early as in the fourth quarter of this year.

But the Fed’s problem is of a different nature… it is trying to achieve two things at the same time, i.e. price stability and full employment. At least, that’s what the Fed’s mandate states. But as Dutch Nobel laureate Jan Tinbergen taught us a long time ago, a Central Bank can’t have two targets (price stability and full employment) if it only has one policy instrument (the interest rate).

If you want to maintain price stability (by raising interest rates), you’re not going to achieve full employment, which in the US roughly defined by an unemployment rate of 4% or lower. Something’s got to give!

The Fed should have stepped in earlier

So, with the Fed way behind the curve when it comes to price stability, it’s all hands-on deck. We’ll see a number of aggressive interest rate hikes in the next little while, which will substantially hurt economic growth and employment. We believe that if the Fed had stepped in earlier, i.e. in late 2021, it would have had a much better chance of staving off a recession in the US. But increasing interest rates back then didn’t really fit in nicely with its full employment mandate, hence the mess we’re in now.

The latest talk is that the Fed may increase interest rates by a full percentage point in July!! Talk about being behind the curve and having to catch up.

How bad will it get?

So, where to from here for the equities markets? We’ll definitely see additional interest rate hikes throughout the remainder of 2022 and into 2023, and at the very least that will put a drag on the market at the current levels.

But if inflation in June and July exceeds the already high 8%+ numbers we saw in April and May, we suspect the Fed, and the Reserve Bank of Australia (RBA) too, will come down even harder with higher rate hikes than expected thus far.

And who knows what sort of half-baked measures the ECB will take….probably just a 25 basis point increase, which will do absolutely nothing to combat inflation. Hans Tietmeyer, the Buba’s last President before the ECB took over monetary policy in 1998, is probably looking down from the heavens shaking his head in disbelief.

We haven’t seen market capitulation yet

In a nutshell, we don’t trust the market right now. We haven’t seen widescale capitulation by investors yet where they sell everything regardless of quality, similar to what we have typically seen in the final stages of previous bear markets. But we suspect that moment may not be too far off if and when the inflation figures for June and July come in worse than expected.

At that point we believe the market will just assume central banks will do “whatever it takes” to kill off inflation, which we expect could push the equity markets into capitulation mode. Those are usually the best periods to buy shares, by the way!

Given all the uncertainty in the markets, investors may just want to stay on the sidelines for a while. Although, with the current high inflation levels, real interest rates are still negative, despite rising nominal interest rates. So, putting your money in the bank will hurt too. In this environment, with basically every risk asset under pressure, we quite like secular stocks that can perform regardless of the macro environment.

So, what stocks to buy? As regular readers of Stocks Down Under will know, we are big fans of technology stocks, specifically semiconductor stocks, that have largely completed their development work and are moving into the commercialisation phase. These companies are typically talking to dozens of prospects and could announce new commercial deals at literally any moment.

Good examples on the ASX are Weebit Nano (ASX:WBT) and BrainChip (ASX:BRN). Both announced commercial deals last 12 months that triggered very substantial share price rallies. And we expect more news to come out of these companies this year.

Disclosure: We like WBT and BRN so much, we own shares in both companies.

Another “secular” stock we like is Beach Energy (ASX:BPT) that is benefiting from high gas prices. And it should benefit from the looming gas shortages on Australia’s east coast. The company hasn’t hedged its gas sales, so it will benefit from any further increases in gas prices.