DGL Group (ASX: DGL) is an end-to-end chemicals business operating across Australia and New Zealand. The company operates through three segments of chemical manufacturing, warehousing and distribution, and environmental solutions.

The chemical manufacturing segment produces a range of specialty chemicals, including AdBlue. We wrote about DGL Group in early 2022 (read here) with a bullish recommendation and a $4 target price as the prices of AdBlue were soaring due to a global shortage of Urea, a key ingredient to produce AdBlue. DGL’s share price subsequently added another 60% in the next few months.

Let’s have a look at DGL’s chart to see what moved its share price since its IPO in May 2021. 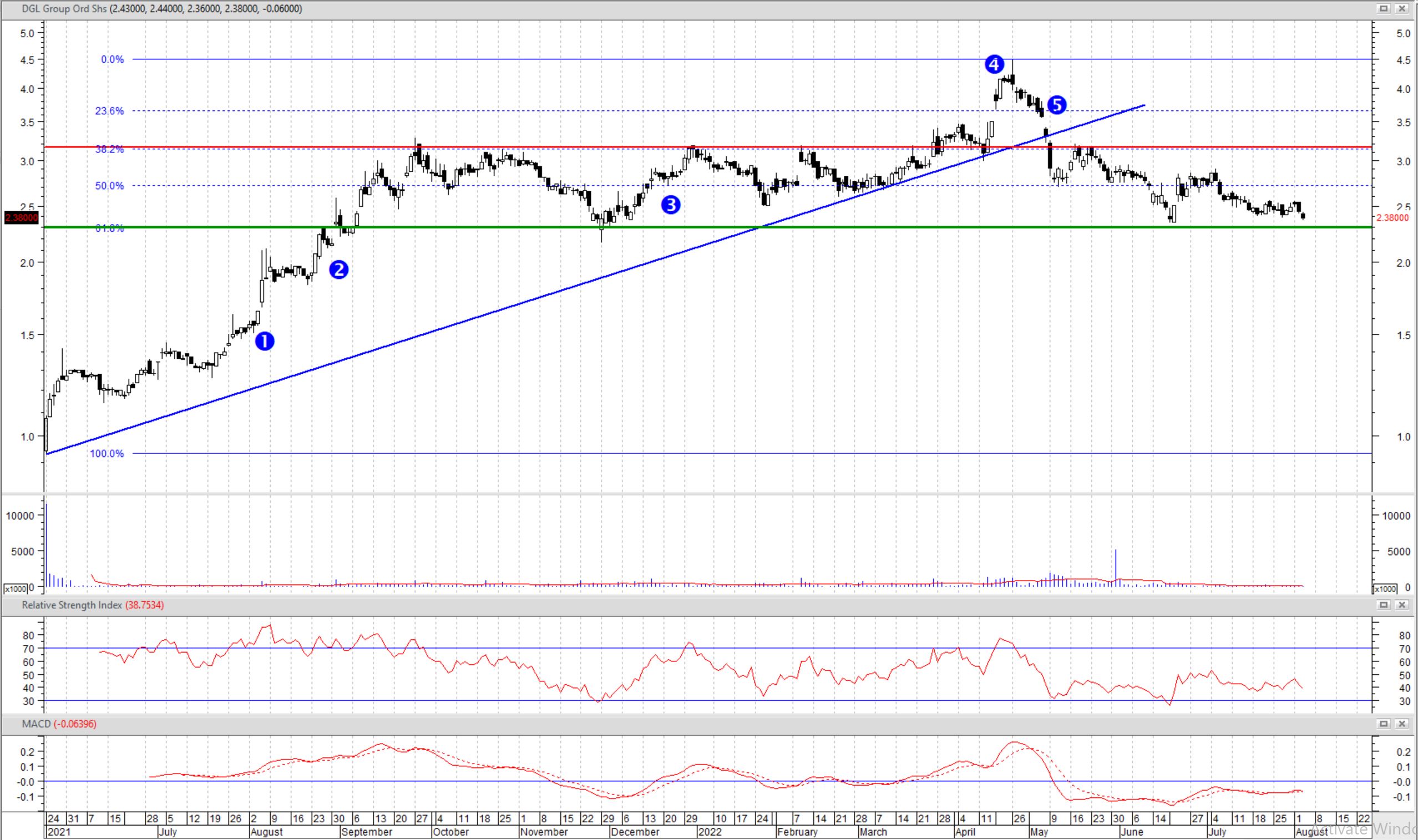 ❶ DGL acquires Opal Australasia, a specialist contract formulator and packaging business based in Western Australia for $8.6m, including a property valued at approximately $4.3m and a valuation of 5.1x LTM earnings (last twelve months) funded by cash and a share component of $1.9m. (DGL Acquires Contract Formulator and Packaging Business)

❺ DGL CEO’s comments about Ms Nadia Lim, a co-founder of My Food Bag, a meal delivery company, sours the sentiment on the stock.

DGL’s share price rose from its IPO price of $1.00 to a high of $4.50 in less than a year due to the company’s successful acquisitions and constant earnings upgrades. DGL’s CEO, Simon Henry, owns more than 58% of the company and has only increased its holdings since last year’s float by buying more shares on-market.

Soon after DGL’s share price peaked in late April 2022, Mr Henry’s negative comments on a New Zealand public figure went viral on social media and triggered scrutiny on DGL. Some commentators argued this company might just be a classic example of a high P/E-multiple listed company roll-up of low P/E-multiple private companies where the growth only continues so long as the rolling wheel keeps going.

However, we think that the collapse of the share price following Mr Henry’s interview may have only created an opportunity for buyers.

Operating in an important industry

The chemical industry is one of Australia’s largest manufacturing sectors, adding $11.6 bn to the country’s GDP directly. Additionally, this sector adds more than $38 bn in value through supply contributions to 109 out of 111 Australian industries, including food and agriculture, pharmaceuticals, mining and manufacturing.

There are about 5500 Australian companies of all sizes operating in the chemical industry, employing more than 60,000 people in highly skilled jobs directly and about 212,000 more in related supply chains.

Although Australia has tremendous potential to extract more value from its chemical industry due to its large petrochemical and mining industries, the chemical industry is expected to grow at a rate of 1.6% per year for the foreseeable future, according to Aruvian Research.

This relatively slow industry growth rate is due to factors such as the country’s small population and increasing sustainability considerations.

While the expected industry growth is not exciting, we don’t see a collapse in demand either as the chemical industry creates essential inputs that underpin other areas of competitive strength and strategic priorities for Australia, such as the growing food and mining industries.

Although these growth rates far exceed the expected industry growth rate, we think they are achievable for DGL as the company continues to acquire well-established and profitable companies across Australia and New Zealand’s chemical industry.

That being said, with a forward P/E multiple of 20.1x and an EV/EBITDA multiple of 11.5x for FY22, we don’t think DGL needs a very substantial expected earnings growth rate to justify its current valuation.

How to play DGL’s stock?

The share price has retraced to the 61.8% Fibonacci level of the uptrend (from the stock’s IPO at $1.00 per share to the all-time high of $4.50). This price level has also reversed the share price on multiple occasions in the last few months, which makes it an important support level (the green line on the chart). Therefore, we think that prices near this level at $2.30 are attractive for buyers. But wait for the FY22 results due in August 2022.

We think that in the likely scenario of the company beating its latest earnings guidance, Mr Henry’s doing can potentially be undone. The share price could then rise to the resistance level of $3.15 initially (the red line on the chart) with a longer-term target being the all-time high level at $4.50 in the next several months.

Where to put the stop loss?

We think that a break below $2.00 can be used as a stop loss. A break below the psychological level of $2.00 would mean that the support level at $2.30 is also broken and it would be a significant sign of bearish sentiment on the stock. It would potentially lead to lower prices.