Evolution Mining (ASX: EVN) shocked shareholders earlier this week when it announced another production downgrade. The news led to shares falling over 20% in a week, and shares are down 37% in 2022. Whenever a company falls after bad news, investors may see an opportunity to ‘buy the dip’.

But we don’t think Evolution Mining represents a good opportunity for 2 reasons. First, because of its poor track record – it has consistently failed to meet and downgraded its production guidance. And second, because we think spot gold prices will stagnate for the foreseeable future, which degrades gold mining companies as investment opportunities.

Who is Evolution Mining?

Evolution Mining is a gold producer, which has five gold mines across Australia and Canada – Cowal in New South Wales, Mungari in Western Australia, Mt Rawdon and Ernest Henry in Queensland, and Red Lake in Canada.

It began in 2011 through the merger of Catalpa Resources and Conques Mining, and the concurrent acquisition on Newcrest’s Cracow and Mt Rawdon mines. Its portfolio has shifted a number of times in the last decade through acquisitions and divestments. Ernest Henry was the most recent addition, with the purchase of the project from Glencore completing in early 2022. 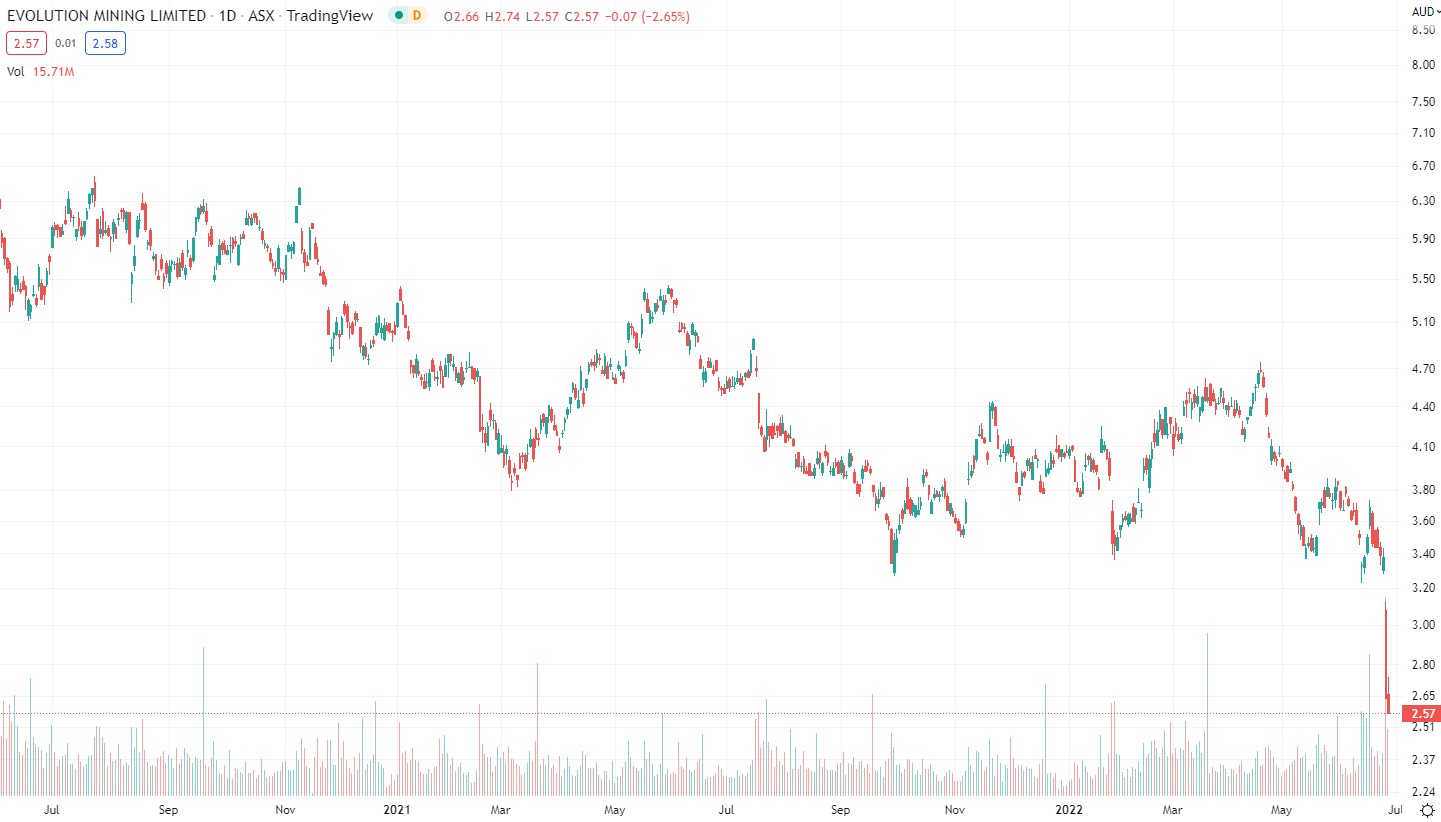 Gold market to blame for the underperformance of Evolution Mining

Even prior to this week’s drop, Evolution had not been performing well. Although equity markets have been tough, resources stocks have fared better than their peers. The ASX 200 Resources Index is up 1% in CY22, while the ASX 200 is down more than 11%.

We think a deeper catalyst for Evolution’s underwhelming performance in 2022 can be attributed to the subpar performance of gold. 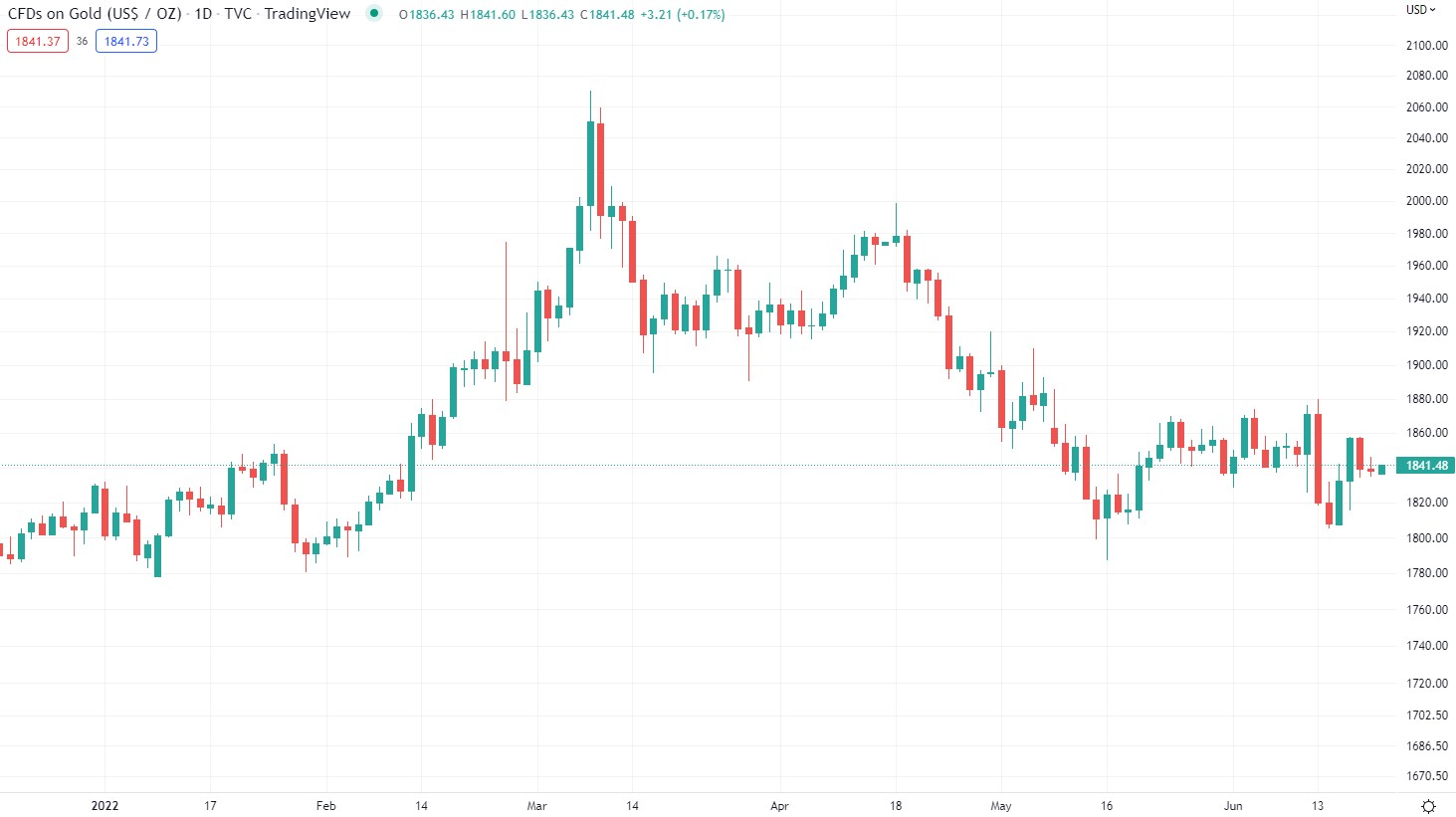 Gold is conventionally viewed as a safe haven during economic crises, but that hasn’t been the case in 2022. The global economy and financial markets are arguably in their worst shape since the GFC, with the war in Ukraine, decade-high oil prices, runaway inflation and rapidly rising interest rates, not to mention the ongoing pandemic.

But gold hasn’t grown to the extent it has in past market crises. After a brief spike, when the war in Ukraine broke out in February, gold prices have retreated and are barely in positive territory in 2022.

Why has gold stagnated?

As we already touched on, we think gold has stagnated in the current market for a couple of reasons.

First, because of the myriads of alternative investment opportunities perceived as an inflation hedge. There’s no shortage of risk-free financial instruments to offer the same protection against inflation and might offer some interest as well (namely TIPS – Treasury Inflation-Protected Securities). These securities don’t have storage costs, like gold, and are highly liquidity and have low transaction costs.

Many such opportunities, particularly crypto, did not exist before and have become popular because the cost of money has been low for so long. For assets that did exist, particularly consumer staples and resources shares, these did not have the same perception as inflation hedges during the GFC.

Second, we think there isn’t as much hype around gold exploration compared to other minerals – particularly battery metals. Even if one views gold from the perspective of an investment opportunity, rather than the raw commodity, cannot disassociate gold prices from the precious metal’s supply and demand dynamics.

Could gold bounce back?

The latest rally in the gold price was from 1,055 US$/OZ to 2,080 US$/OZ during 2016 to 2020. Half of this rally happened as a result of economic uncertainty brought on by the COVID-19 pandemic. But it didn’t take long for the economic recovery to begin, even during the pandemic.

Presently, high inflation rates are widespread around the world and interest rate increases are on the central banks’ tables. Although at the moment we are still facing negative real interest rates, this has failed to drive the gold price up further. This fact is another piece of evidence that gold may not be a good hedge against inflation.

If negative real interest rates have failed to drive the gold prices higher, then there are not so many other reasons left to believe in short to medium-term upside moves in the gold prices. Geopolitical tensions brought on by the escalating situations in the Ukraine-Russia and China-Taiwan conflicts should be monitored closely, but it would likely take a major escalation for it to start impacting gold prices again.

Using technical analysis on the price chart of gold, we can see price retracements to minimum 50% Fibonacci levels after each of the first three significant moves in the gold price since the 1970’s. The same level of retracement to the latest rally in the gold price would bring it to $1,575 US$/OZ (Black line on the chart). For that to happen, the support line at $1,684 (red line) would need to be broken first. 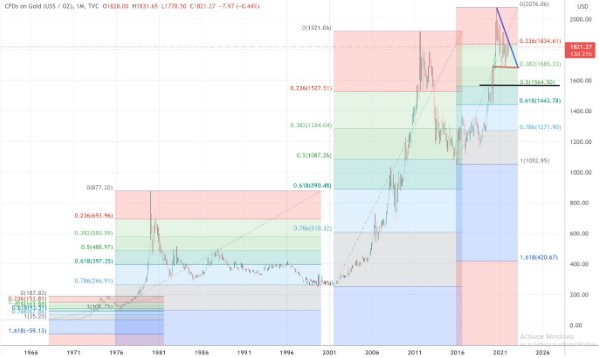 What does this mean for Evolution Mining?

We think that even if Evolution Mining can reach its production targets, which is no certainty based on its track record, it will reduce its earnings.

The latest drop in Evolution’s share price means it is trading at 4.4x EV/EBITDA and 10.7x P/E for FY23. Consensus estimates forecast $2.5bn in revenue and $1.2bn in EBITDA in FY23, which would represent 21% and 26% growth from FY22 consensus estimates.

These metrics alone might make Evolution Mining appear an attractive investment. However, we have our doubts considering its track record, and evidently, so do investors.