Good Drinks Australia (ASX: GDA) brews and sells beer, cider and other beverages in Australia. The company offers its products under the Gage Roads, Masto’s, San Miguel and other brands. Its main brewery facility is located in Palmyra, WA, and produces more than 17 million litres annually. GDA also operates hospitality venues across Australia.

The primary reason why Good Drinks has caught our attention today is because of a recent rally in the share price of Mighty Craft (ASX: MCL), a craft beverage producer and a peer company of Good Drinks.

The rally in Mighty Craft’s share price accelerated after the company reported an 81% year-over-year increase in cash receipts during the September quarter to over $20m (point 1 on Mighty Craft’s chart). Its share price rose from its Corona Crash low of 13 cents in in Mid-October 2022 to a high of 25 cents in early November 2022 and on its way broke the downtrend and the resistance level of 20 cents. 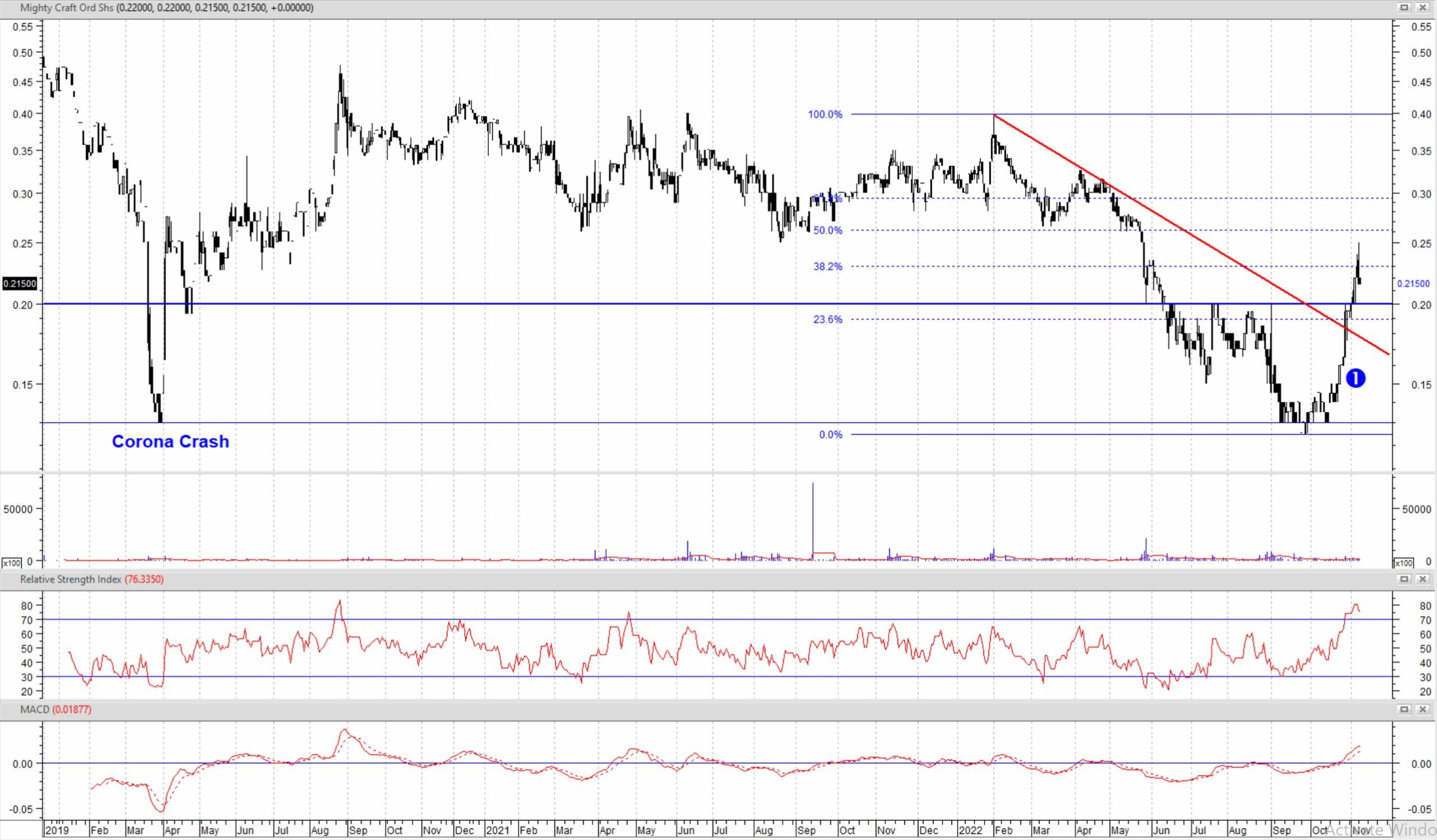 A massive demand recovery for craft beverages has occurred

We expect to see a similar sales recovery in other craft beverages producers, such as Good Drink Australia. The reason is because Australia has put the pandemic behind it and all hospitality venues that serve craft beverages are now open and hospitality conditions have returned to normal. So people are enjoying their regained freedom to spend more quality time at bars, pubs and clubs.

The peak trading season is yet to come

Total per capita consumption of beer in Australia has been steadily declining since the mid-1970’s. The reason is because consumers have cut their alcohol consumption and shifted their preference towards wine and spirits and more recently cider.

Mighty Craft and Good Drinks are each covered by one analyst, and their estimates show expected substantial jumps in revenue in FY23 for both of those companies. However, based on the analysts’ estimates, Mighty Craft is currently trading at an EV/EBITDA multiple of 30x for FY23, with the multiple for Good Drinks standing at 9.8x, which makes Good Drinks’ valuation much more attractive than that of Mighty Craft, in our view. 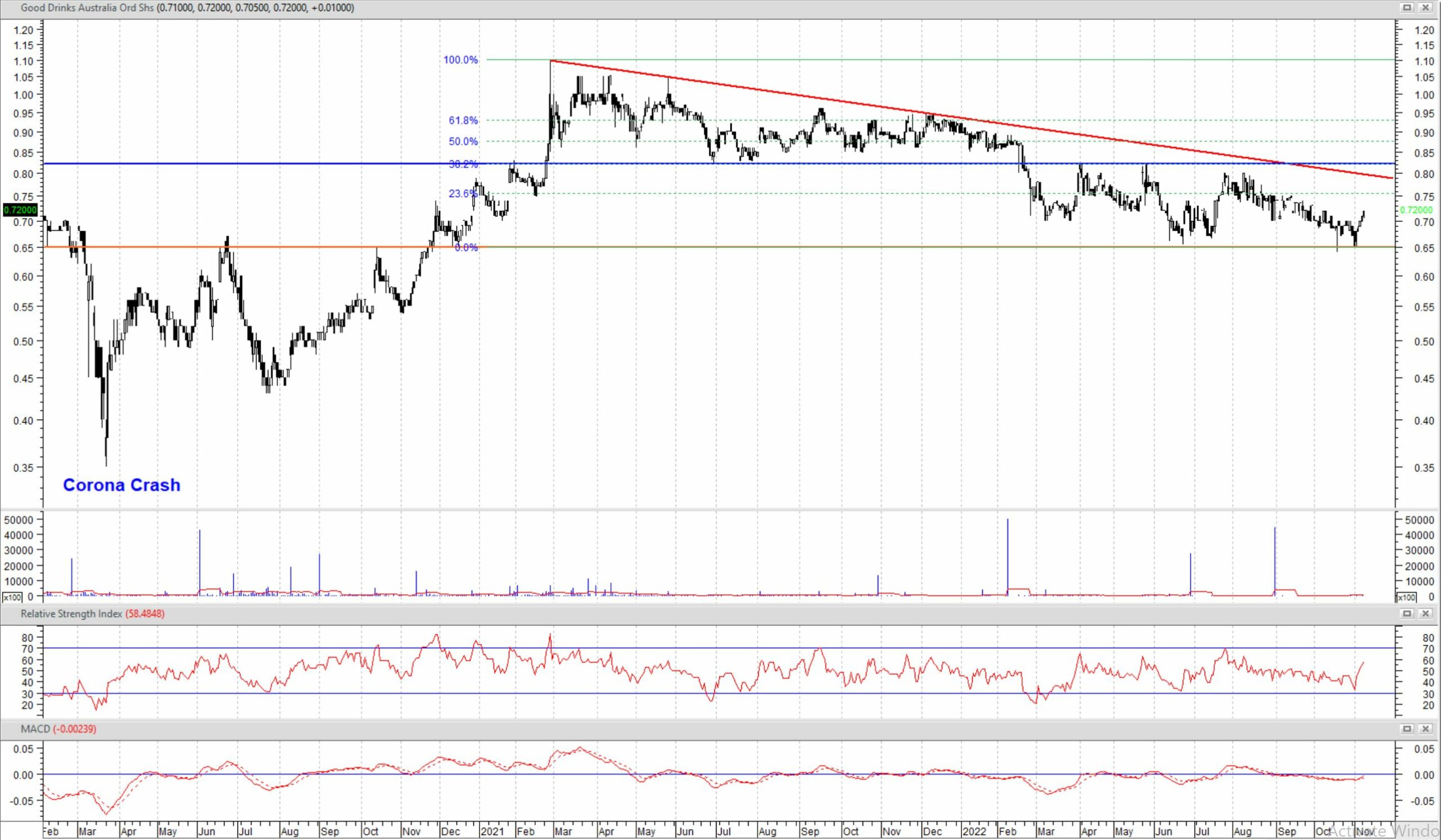 Good Drinks FY22 results were impacted by COVID-19 interruptions to the hospitality channels, but the company expects a return to normal trading conditions in FY23 as the country has come out of the pandemic situation.

As per the ASX rules, non-profitable companies, such as Mighty Craft, are required to announce their quarterly reports to the market, which is not the case for profitable companies like Good Drinks. We think had Good Drinks reported its September quarterly results as well, we would’ve seen a similar improvement in Good Drink’s business. So we expect to see a significant improvement in the company’s 1H23 results.

How to play Good Drinks’ stock?

We expect the support level of 65 cents (the orange line on Good Drink’s chart) to hold until the company announces its 1H23 results. In the case of a significantly improved financial performance in the period as we anticipate, Good Drink’s share price can potentially break the downtrend (the redline on the chart) with a target price of 93 cents at the 61.7% Fibonacci retracement level.

We suggest using the support level of 65 cents as a stop loss level. A confirmed break below this level would indicate bearish sentiment on the stock that can open the way down to lower levels.