LiveHire Limited (ASX: LVH) is a SaaS company providing online talent acquisition software solutions to enterprises of all sizes in Asia Pacific and North America. The company operates LiveHire, a cloud-based human resources productivity tool for talent sourcing and recruitment. Its platform enables customers to use their brand, employee networks and digital assets to invite and curate talent from online and offline sources into a private talent community. The company was founded in 2011 and is based in Melbourne, Australia.

LVH to go down under its own weight

There’s a saying amongst technical analysts that if a stock’s price doesn’t go up, it will go down under its own weight. LiveHire’s share price has spent a good part of the last 20 months trading in a range of 30 to 40 cents (the two green lines on the chart) and we think, with the company’s slow revenue growth, the share price is bound to break below this range towards 20 cents (the blue line on the chart) 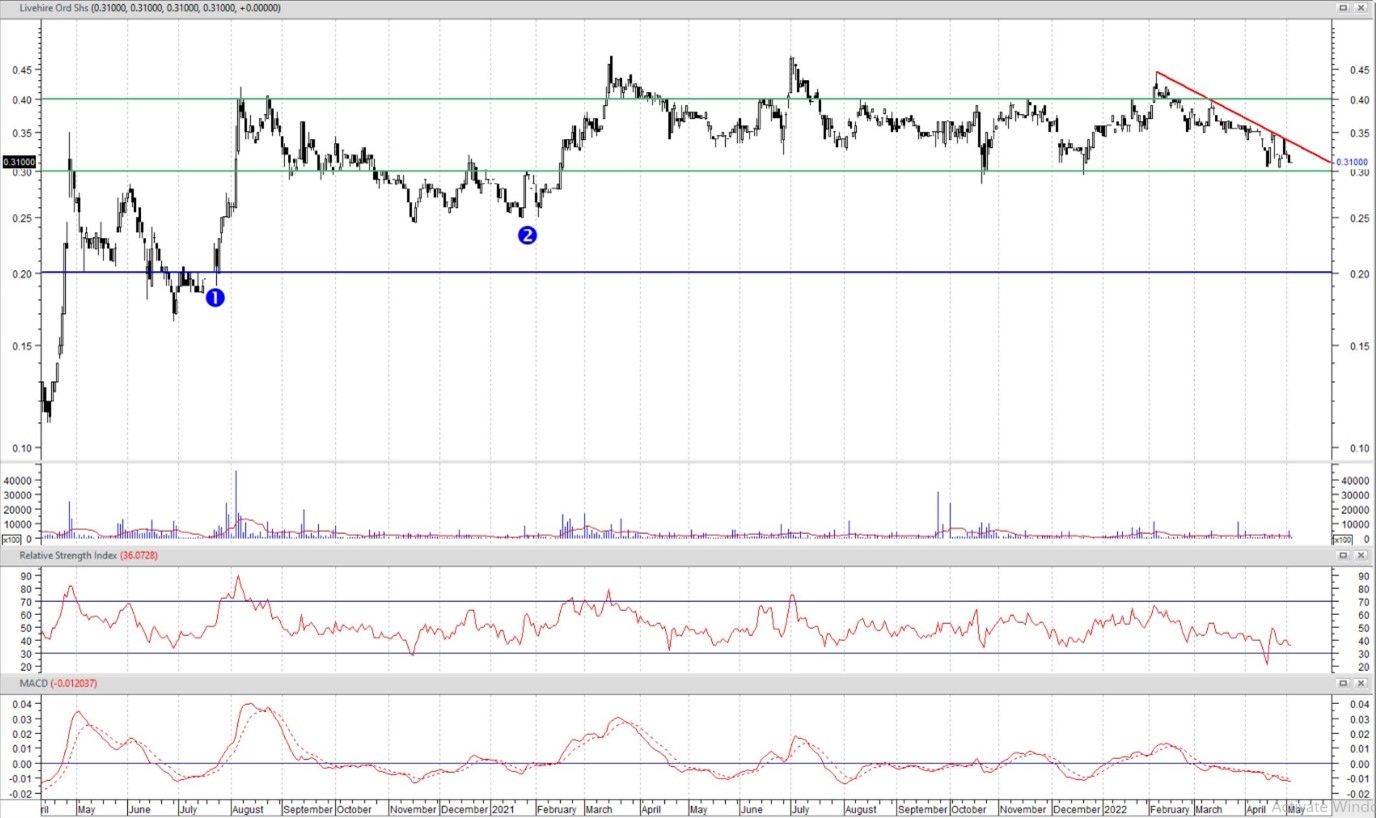 ❶ LiveHire releases its 4Q20 report which is followed by a report from Phillip Capital putting a strong buy recommendation on the stock. (Response to ASX Price Query)

❷ Relatively strong cash receipts in the 2Q21 report excite the market to push the share price to a high of 47 cents. (Quarterly Activities Report and Appendix 4C)

Since then, LVH’s results failed to excite the market as the reported revenue growth rates were rather small and, consequently, the share price went into a range-trading mode from 30 cents to 40 cents.

LiveHire’s total revenue increased from $2.1m in FY18 to $6.3m in FY21 and it reported an Annual Recurring Revenue (ARR) of $5m in its 3Q22 report. In our view, this level of revenue and revenue growth trajectory is too small to justify LiveHire’s market capitalisation of $93m at the time of writing of this article at a share price of 31 cents.

In the last twelve months to 31 December 2021, LiveHire made $9.4m in losses. Given the company’s revenue growth trajectory (based on the results of the last four years), LVH is years away from generating profits, in our view.

A capital raising around the corner

According to LVH’s 3Q22 report, the company’s cash burn is around $2m per quarter and the cash balance was $9.3m at the end of the period. This means that the company has enough cash to burn for a maximum of 4 quarters during which it will have to raise capital to be able to continue as an ongoing concern, in our view.

Given the bearish sentiment on technology stocks brought on by rising interest rates, we expect LVH’s share price to continue its short-term downtrend (the red line on the chart) and decline towards the support level at 20 cents in the next few months (the blue line on the chart).

A confirmed break above 35 cents would mean that the current downtrend is broken, and it significantly reduces the chances of further decline in the share price in the short term.