Some of RFG’s brands include Michel’s, Donut King, Brumby’s Bakery, Crust, Pizza Capers and The Coffee Guy. It also roasts and sells coffee and related products under the Di Bella Coffee brand.

The resistance level of 6.5 cents is broken

Retail Food Group’s share price broke the resistance level of 6.5 cents (the blue line on the chart) on the back of the company’s strong FY23 EBITDA guidance in its chairman’s address to the Annual General Meeting on 30 November. 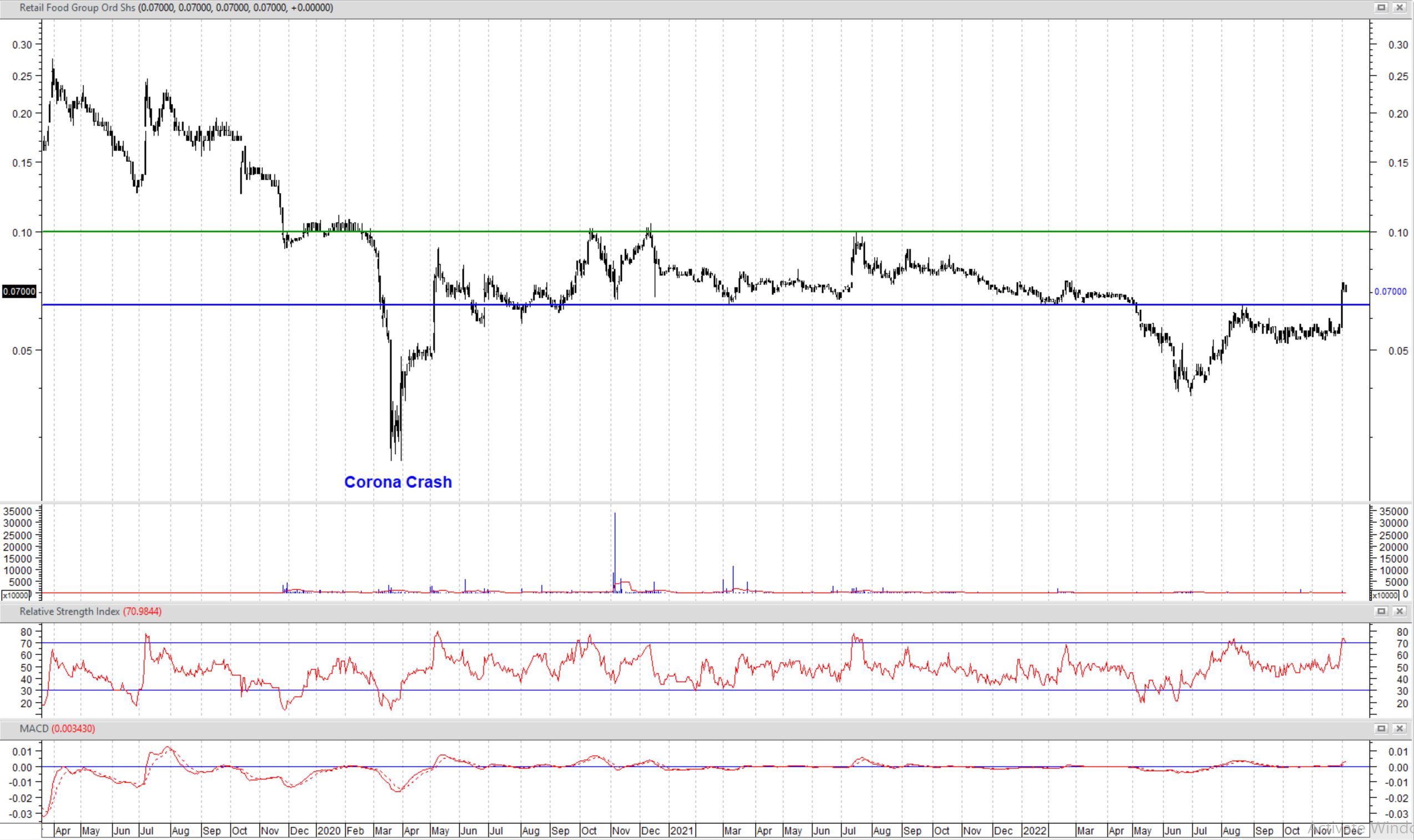 Retail Food Group’s earnings took a massive hit during the pandemic because of the imposed COVID-19 restrictions that led to the closure of some of its stores and reduced foot traffic to many others. But now that Australia and the other markets where the company operates have put the pandemic behind them, RFG’s sales across many of its businesses have recovered to above the pre-pandemic levels of FY19.

The company first witnessed increasing same-store-sales and Average Transaction Value (ATV) across the domestic network of its franchises in 2HY22, which has continued to date. RFG recorded FY22 profits of $5.25m, a significant improvement versus FY21 earnings of $1.46m despite Government financial support of circa $3.7m received in FY21.

Retail Food Group has had a great FY23 so far

According to the chairman’s address, during the first 21 weeks of FY23, RFG has witnessed a continuation of recovery across its businesses, particularly amongst its bakery, QSR and coffee brands. Total sales for the period have shown a 16.5% increase on the prior comparable period due to a combination of customer count growth and ATV growth across the company’s network.

The strong year-to-date results have increased optimism for the company’s performance for the rest of the year and it announced a FY23 underlying EBITDA guidance in a range of $26m to $29m, representing an increase of circa 21% to 35% compared to the FY22 results.

Retail Food Group’s stock is covered by two analysts and they estimate an EBITDA of $28.7m for FY23, at the top of the company’s guidance range of $26-29m. The analysts also expect further EBITDA growth for FY24 and FY25.

Using the mid-point of the company’s EBITDA guidance, RFG’s stock is trading at an FY23 EV/EBITDA multiple of 9.1x and a P/E multiple of 7x. So, RFG is attractively valued at the current share price of 7 cents, in our opinion. But there are risks associated with this stock too.

In December 2020, the ACCC (Australian Competition & Consumer Commission) accused RFG of misleading and deceptive conduct when the company sold or licensed 42 loss-making corporate stores to incoming franchisees from 2015 to 2019.

We think those are serious allegations and the uncertainty regarding the timing and the magnitude of a possible settlement is a big threat to RFG’s share price.

Although Retail Food Group has significantly reduced its debt levels in the last 4-5 years, it had $128m in debt as of 1 July 2022 and a cash position of $29m, giving an outstanding net debt of almost $100m.

The company says that it was in compliance with all lending covenants at the end of FY22. But given the current rising interest rates environment, RFG’s high debt levels can eat into its FY23 earnings, in our opinion.

Given the continuing recovery in RFG’s earnings and the upcoming festive season in December as well as the continuation of the recovery in the overall stock market, we think RFG’s share price can reach the resistance level of 10 cents (the green line on the chart) in the next few months, implying a 43% upside potential to the current share price of 7 cents.

As such, we think prices near the broken resistance level of 6.5 cents are attractive (the blue line on the chart). This broken resistance level should now act as a support level for RFG’s share price and we think it can be used as a stop-loss level. A confirmed break below 6.5 cents would indicate significant bearish sentiment on the stock that can open the way down to lower levels.