Ora Banda Mining (ASX: OBM) is an emerging ASX gold producer. Its flagship project is the Davyhurst Gold Project located in the North-West of Kalgoorlie, Western Australia. OBM plans to produce gold from its deposits situated within 50 km of its processing plant at the town of Davyhurst, including Siberia’s open pit mine and the Riverina and Callion underground mines.

Ora Banda Mining’s share price has risen from 5.5 cents to 8 cents in the last couple of weeks. The 45% rally followed the recent spike in gold prices accompanied by the weakness in the Australian dollar versus the US dollar after the RBA delivered a smaller than expected interest rate hike.

Let’s have a look at Ora Banda Mining’s chart and see what drove down its share price from a high of 35 cents two years ago to the current price of 8 cents. 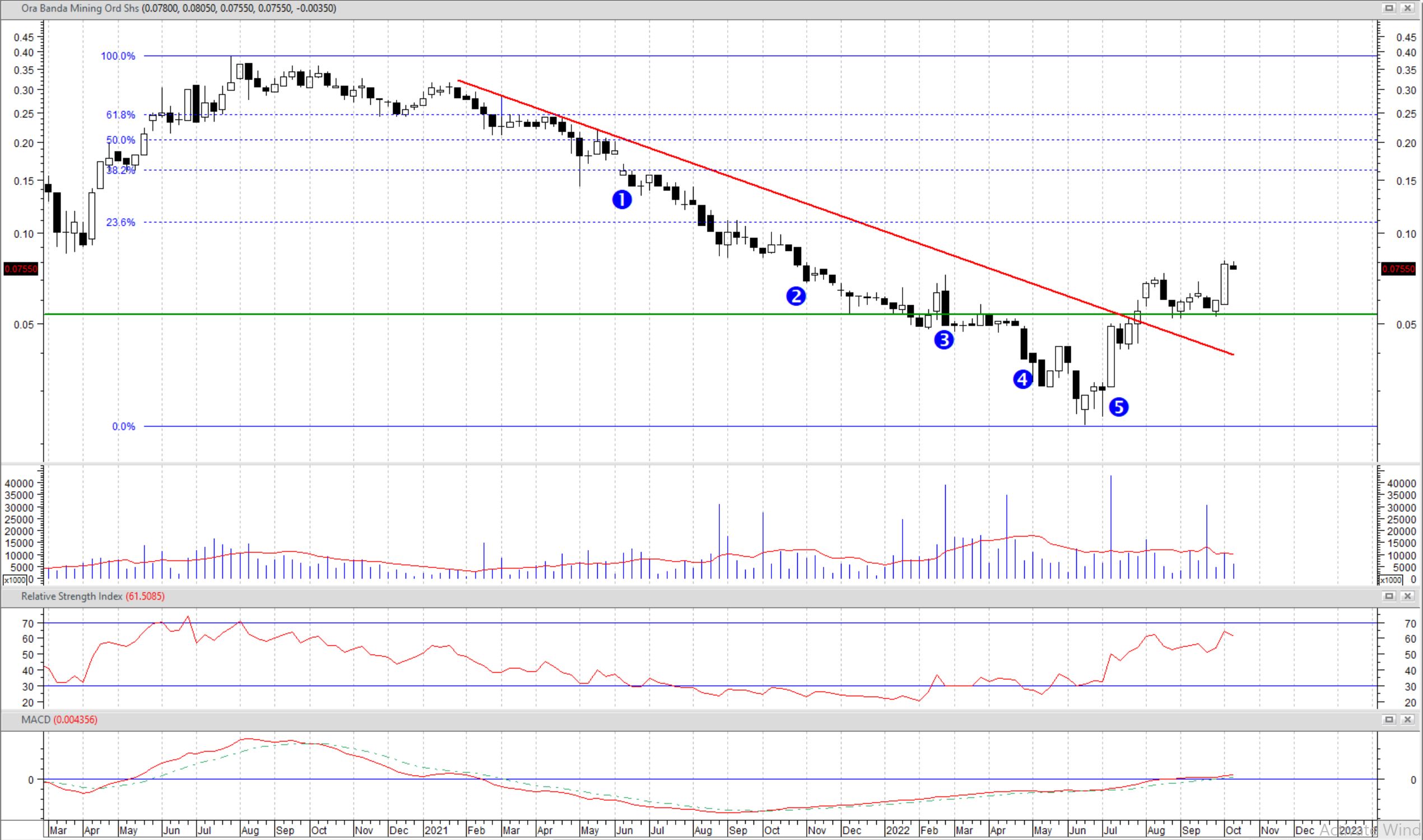 Ora Banda Mining’s share price came down due to the combination of operational underperformance, dilution from an equity capital raising and sliding gold prices. The appointment of the highly regarded new CEO in July 2022 brought fresh hopes that the operational issues can be resolved quickly and that the company can get back on track to extract more value from its large gold assets in a shorter timeframe.

OBM says its equipment and infrastructure at its Davyhurst Gold Project is worth ~$180m. This number alone is significantly larger than Ora Banda’s enterprise value of $105m.

OBM’s Davyhurst tenements have a resource base of 2 million ounces of gold at an average grade of 2.5g/t and 1.4 million ounces of gold have been produced from the area since 1897. Following the equity capital raising in February 2022, the company has committed over $10m to resource definition and exploration with a focus on higher-grade underground targets at its Davyhurst tenements. The results of this effort can increase the project’s resource base and lead to higher-grade feedstock for the processing plant.

Market is excited about the new MD

When the former Northern Star Resources (ASX: NST) COO, Luke Creagh, was appointed as OBM’s CEO in July 2022, the news resulted in a spike in OBM’s share price, from 3 cents to 5 cents (Point 5 on the chart).

The market has obviously welcomed Mr Creagh’s move from the ASX-50 gold producer to small-cap Ora Banda Mining and now hopes more value will be extracted from OBM’s gold assets.

We can expect to hear good news any time

The recent changes to Ora Banda Mining’s management could be a sign that things are moving in the right direction and there’s a good chance we’ll get some good news in the near future. Ora Banda is constantly exploring more gold deposits at its resources in Kalgoorlie and it frequently updates the market with its ongoing drilling results.

And since the company’s processing plant is already up and running, any high-grade ore discoveries in the Davyhurst tenements can rapidly boost gold production at the project and impact Ora Banda Mining’s bottom line.

How to play OBM? Targets of 11 and 16 cents in the next several months

In the weeks following the appointment of the new CEO (point 5 on the chart), OBM’s share price broke the downtrend and the chart suggests the sentiment on the stock has shifted to bullish. As the company improves its operational efficiencies under the new leadership, we think Ora Banda Mining’s share price is set to recover to 23% and 38% Fibonacci retracement levels at 11 cents and 16 cents respectively in the next several months.

The 5.3 cents level (the green line on the chart) has been acting as a support level for the last two months. As such, a confirmed break below 5 cents would mean that the support level is broken, and it decreases the chances of short-term share price appreciations.

Disclosure: Pitt Street Research/Stocks Down Under directors own shares in OBM.