Adbri (ASX: ABC) manufactures, imports and sells construction materials in Australia. Its products include industrial lime, cement and concrete. The company offers its products to the construction, infrastructure and mining markets across Australia and has been in the business since 1882.

Despite the robust construction market in Australia in the last two years, Adbri has failed to perform and our technical analysis suggests an attractive short-selling set-up in the company’s stock may be present at the current share price of $1.70.

Share price on a long-term downtrend with increasing momentum

Adbri’s downturn started in August 2021 (point 1 on the chart) when the company pointed to near-term uncertainties in its 1HY21 report despite announcing solid results for the period. It mentioned COVID-19-related uncertainties and limitations to construction activities as well as the commencement of a competing cement import terminal in NSW anticipated to start in 2HY21.

The downtrend in Adbri’s share price accelerated in August 2022 after the company announced decreased profits for 1HY22 compared to the prior comparable period, driven by operational challenges associated with extremely wet weather conditions on Australia’s east coast as well as higher logistics and fuel costs (point 2 on the chart).

The lower earnings were made despite the company’s increased sales during the period. Although the construction market and demand for Adbri’s products remained robust, the company’s price increases only partially offset inflationary pressures. 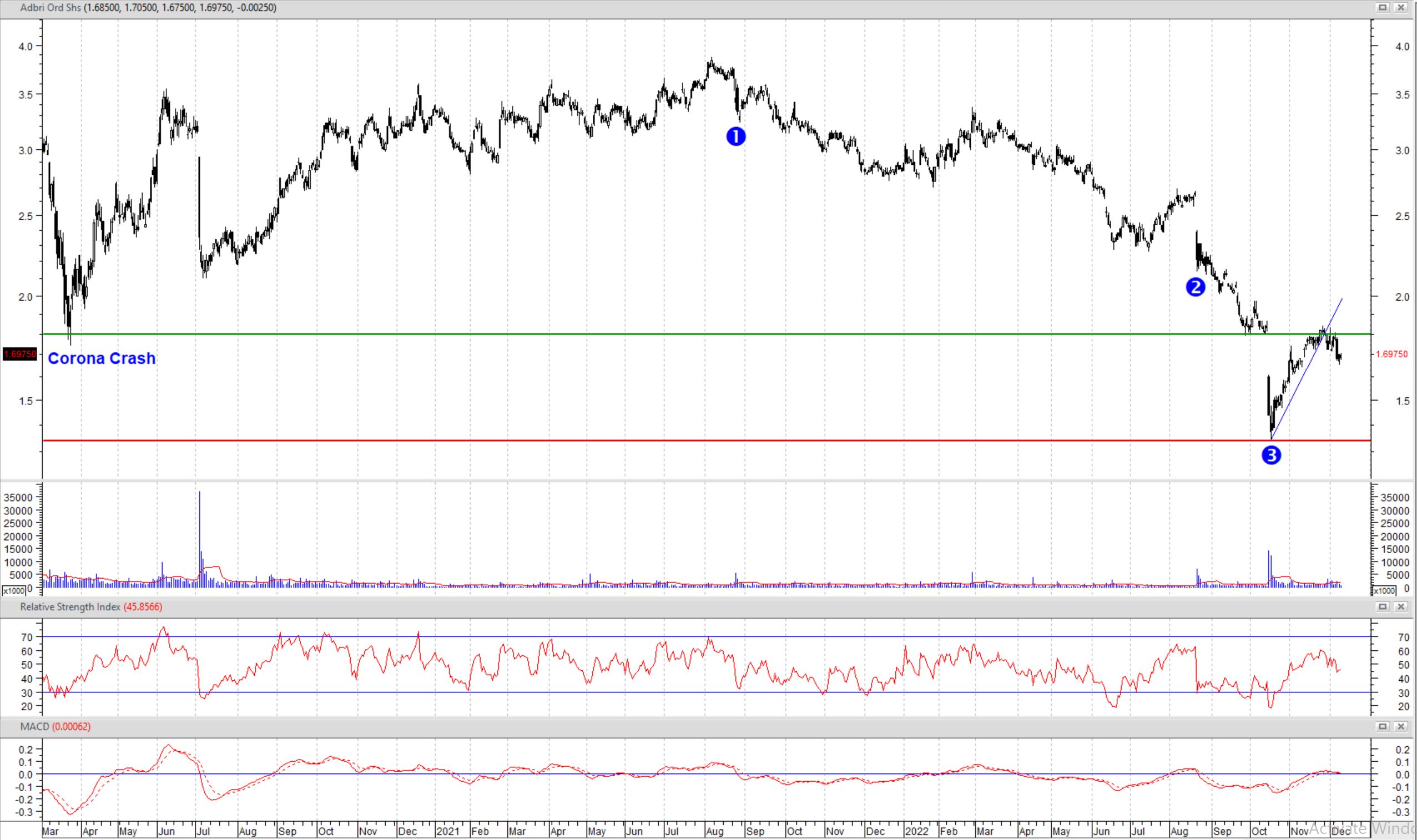 The removal of Adbri’s CEO and more bad news

Adbri’s board of directors finally lost patience with the chief executive, Mr. Miller, who served in the role since 2019, and announced the removal of the CEO in October 2022 (point 3 on the chart). The company appointed senior executive, Mr. Mark, as an interim CEO while looking for a permanent replacement during the next six months, compensating Mr. Mark with a fixed annual salary of $1.35m.

In the same announcement the company also warned of lower earnings for the rest of FY22 (Adbri’s financial year ends on 31 December) as it continued to fail in increasing prices to offset the rising costs despite a robust demand environment. The share price dropped 21% on the day of the announcement.

Australia’s construction market is expected to soften in 2023

Most real estate and construction pundits see a slowdown in Australia’s construction activity in 2023 because of rising interest rates, the general slowdown of the economy, cost increases and the uncertainties in supply chain and labour availability. To learn more about this prediction, savvy readers can take a look at this article by RLB, an independent global construction and property consultancy firm with more than 200 years of experience.

Adbri is unlikely to meaningfully improve margins in 2023

Adbri mentioned improving margins in all of the company’s end markets as one of the interim CEO’s immediate priorities. But we think if the company failed to negotiate higher prices in the strong demand environment of 2022, Adbri’s chances of success for making this happen in a softening construction market in 2023 won’t be very high.

Adbri’s share price successfully filled the gap to $1.80 by the end of November (the green line on the chart). But the recent price action suggests the correction is complete and the share price is back on the downtrend. The big black candle on 7 December made a lower low and signalled that bears are now in control.

As the general market expects an economic slowdown in 2023 and tries to avoid stocks in cyclical sectors, such as industrial stocks, we think Adbri’s share price can see the low of $1.34 one more time in the next several weeks (the red line on the chart). This suggests >20% downside potential from the current share price of $1.70.

A confirmed break above the resistance level of $1.80 would be a sign of a shift in sentiment on the stock to bullish that can open the way up to higher prices and render our current expectation for the direction of the share price invalid.